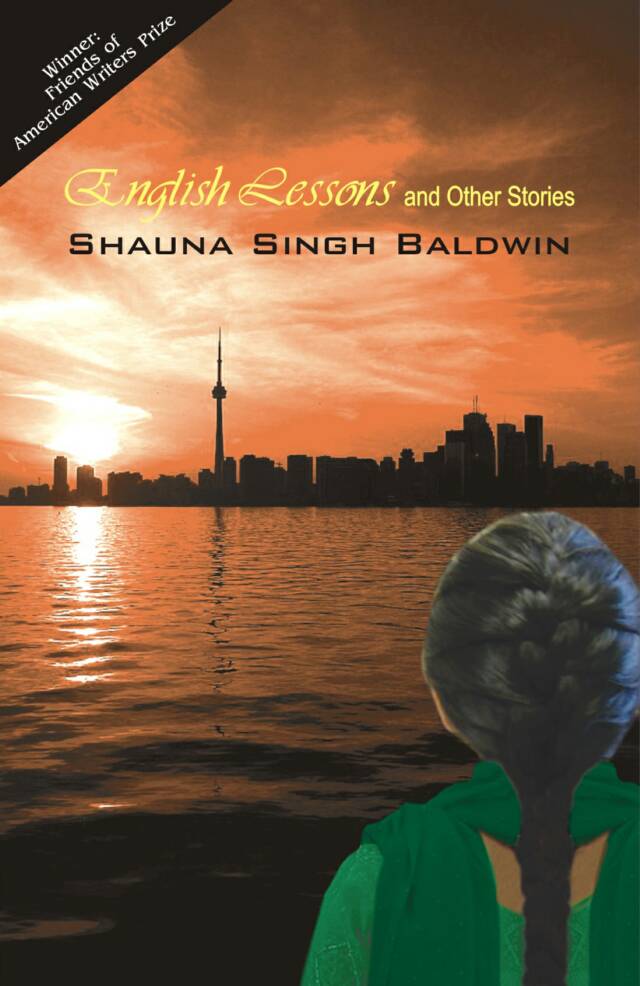 “Are these lessons for everyone? Yes; and they make for interesting reading.  So much is said in a single line…  These stories delight in many ways.  They provide an array of views through a mosaic of characters from different generations and social spheres. Their positions and postures are finely drawn… Every detail is for a purpose… Always present is a lively, active, questioning spirit.”

“In 15 insightful but mostly sad stories, Baldwin examines the bruises and wounds endured by immigrant Sikhs learning how to live in English-speaking North America… Baldwin writes with seeming ease about life in both North America and India.  She devotes loving attention to details of tradition and culture… They are both emotionally and politically loaded, both sweet and sour… English Lessons is a fascinating collection rich in cultural insight.  These are life lessons worth sharing.”

“It is a fine first collection and marks the entry of a promising writer into the expanding world of Indian fiction in English.”

“A writer from an ethnic minority who writes frankly about his or her community takes enormous risks.  It is to Shauna Singh Baldwin’s credit that she has been unafraid to step on a few toes…  English Lessons And Other Stories is distinguished by the visceral shock of truth it delivers.  These autobiographical stories carry the elegiac tone of tales passed from generation to generation…  Baldwin’s prose is precise, nuanced and sensual.  She threads her stories with ravishing glints of colour that explode against the pallid landscape of Canada.”

“One of the great strengths…is their evocation of place.  …her stories bring an exotic colour and texture…  These are stories to enjoy…  Baldwin puts lots of emotional range in her stories…you can expect a great deal from Baldwin”

“Family, place, and politics are rendered like precious intaglios in English Lessons and Other Stories – these are intricate narratives etched deep in hard material.  …superb short stories…  What makes her stories most interesting is that their choices are not what they at first appear to be.  Almost all the stories in the collection, like Shakespearean sonnets, end with the last line of the story ironically reversing what has come before.  …subtle wisdom…remarkable achievements, especially for a first collection… ”

“English Lessons is an unusually assured fictional debut, combining the feel of an old family album with the uncensored stories behind the happy snapshots…  The author has an ability to lift everyday dilemmas out of the realm of cliché into tales of poignant, sometimes searing, power…  Many of these were first written for radio, giving them the immediacy of a conversation with the next-door neighbour.”

Singh Baldwin writes with a restrained passion which describes the friction between East and West, traditional and modern.  She has a genuine talent of turning dialogue into a background which is the real subject of the book.”

“…her stories are significant both as fictional documents which provide some of the inside stories for the Diaspora what it has meant to ordinary people…and also as accounts of the rising awareness and strength of women who must tap their own minds and hearts to enter new worlds, both emotional and material.”

“…comfortable grasp of tone and style…  Baldwin never sentimentalizes, never overplays the emotion: instead, she lets the bald facts of history tell their own grim tale…there are no dragon-slaying heroines here, merely ordinary women who find their courage in the most paradoxical of places.”

“One of the most compelling literary voices in recent times…English Lessons and Other Stories… is not just a peep into the lives of Indian women trying to take hold of their situation of cultural displacement in a foreign land and their attempts to establish their identity, suffering the pulls of the patriarchal set-up, but also the men who fail to understand the needs of women around them…wry humour and varied narrative techniques… Baldwin displays the covert and overt conflict in the minds of her heroines and their rebellion and resistance required for validating the self…The force and strength of the narration lies not only in the poignancy and realism but the dexterity as well, with which the writer relates the tales.”

“Baldwin’s skill is revealed as she takes up small, ordinary incidents and weaves them into beautiful, interesting stories. The language in her book is simple and effective. With her subtle, incremental touches, her characters become alive and their life situations reveal new aspects of their lives.”